WHAT DOES A WRITER DO WHEN NOT WRITING?

The MS for Part 2 of The Last Giant: Transgression is in the publisher's hands, which means that I doff my authorial hat and don one of my other hats, in this case, two: Editor and Designer/Typographer, with a little CEO (of Purple Mammoth Publishing LLC) thrown in for good measure. Yes, we---with two others---own our own publishing company, such as it is.

I am now speaking to you as The Publisher: Part 2 is partly published, with the Kindle version available from the Kindle store and the print version to arrive within a day or two. The design/typography is completed and is undergoing review by a backup pair of eyes---our Art Director who is also the other half  ("J") of J. R. Hardesty. We both wear many hats in this operation. Project director is one hat neither of us wear. That honor goes to Dave Blythe, and he cracks a mean whip!

And then I get to don the Marketing Director hat, but that is another story entirely.

That partly answers the question in the title for us, but what other writers do when not writing would be a topic for a series of blogs which I have no intention of taking on.

Authorial hat back on. Now off-duty, we have been having a marvelous time doing other things that are utterly unrelated to writing.

The primary project involves moving 10" x 11.5" x 12' railroad bridge ties from the pile along the back fence to a new location along the front fence to act as a footing for Greg's garage. Greg is Jan's step-daddy and we are helping him build a garage for the convertible he bought himself for his 80th birthday. Bridge ties are not like a rail tie. Uh-uh. They are bloody HEAVY. We rented a Bobcat KT-55 mini track loader to move them. Had to, otherwise they'd still be sitting on the back yard pile. 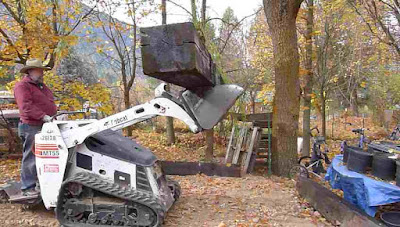 That should give you some idea of what I mean, but to give you a better idea of how much fun this actually was, here's the video for you. 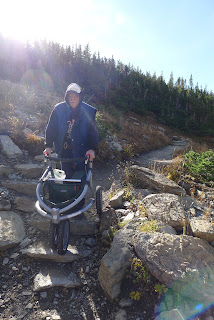 But all work and no play make for a dull person, so we play a little, too. A few weeks back, we went hiking in Glacier National Park on the Highline trail with Greg who was dying to try out his new off-road walker. It is the product of Swedish engineering. It lets him walk on rough ground so he is no longer limited to pavement & sidewalks. We were very impressed with how this walker allowed him to go where otherwise he could not. The weather was great, the view magnificent and we had an absolute blast. Greg had a grand time of it as he had not been able to hike that trail for many years and he used to hike it all the time. It was something of a homecoming for him.
These photos give you something of the experience of the day, and certainly show how remarkable that walker is. It is called a Veloped and we got it from Trionic USA  and you can definitely consider this a product recommendation! And no, we aren't getting any kickback from them! 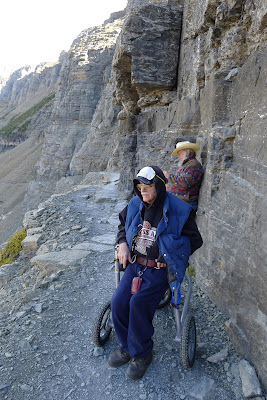 That's Greg taking in the view with me behind him soaking it all in. 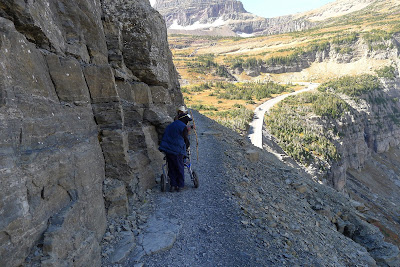 The view south along the trail. That ribbon-looking thing down below is the Going-to-the-Sun Road. Looks rather small from up there on the cliff.

Well, that's what these writers do when they aren't writing. We work and we play.

“The scope of the story is massive and immersive, hooking readers early and intriguing them throughout the whole story, while laying the important groundwork for what is planned to be an expansive saga … this book carries on the tradition [of high fantasy] beautifully and sets the stage for a powerful epic saga offering plenty of adventure and excitement to those with the imagination to travel along with Menannon and his friends.” — Michael Radon, U. S. Review of Books
“... I found myself sinking into this magical and creative world ... and found myself transported to another time and place altogether. The author has genuine talent in the fantasy realm, and is ... well-versed in the craft. --Karen Matthews, Indie Book Reviewers
“... enough action and conflict and plot twists and descriptive fantasy-world-building to keep you interested throughout ....” --J.T. Thomas, Indie Book Reviewers

“... demonstrates a strong and almost addicting narrative style and great attention to detail in ... kept me eagerly turning the pages of my Kindle late into the evening.” --Claire Middleton, Indie Book Reviewers

"...brilliantly imagined and fully-developed...the writing was excellent...I'd love to read the next one!" --Samantha Ryan, Indie Book Reviewers

"...it takes time for all the layers of the fantasy world to come into play...lesser authors will just dump everything on you at once ... better authors know to do it gradually and over time, [as] was done in The Last Giant: Transgression...very descriptive...never bored..." --Stacy Decker, Indie Book Reviewers

"This was a great change of pace for me, as I normally gravitate towards more realistic-style fiction, but this was one epic tale that I couldn't put down!" --April Dawn, Indie Book Reviewers

The Last Giant: Transgression is out and available! The trade paperback (794 pp, ISBN 978-0-9907264-7-0) is priced at $29.95. Available from Amazon.
The Spanish and Italian editions are also available as an e-book from Amazon, Barnes & Noble, Apple, Kobo, Scribd, and Tolino.
Chapter 1 is available as a free download for your delectation.